Kalyan's Heroic Act to save a Woman's Life

Kalyan, a software engineer who risking his own life, saved the life of a women who fallen from 17th floor and was caught and hanging from 15th floor in his apartment building.

Radio City FM appreciates and interviewed him on 04th October, 2013

Complete Description of the Event has been narrated by Mr.Kalyan, a Madurai-based Tamilian, as follows:

1. At 5:18 I woke up for no reason, within 10 minutes I heard a sound like Gas cylinder has fallen and later on it was followed by a female crying voice. My wife anticipated a Cylinder explosion and crazily dragged me to the balcony to check. There we witnessed the worst shock in my life - A woman hanging upside down and holding the balcony rail. My pessimist thought made me believe this lady cannot survive for longer just by holding the balcony rail, reason she was hanging upside down.

3. Since this was exactly 4 floors below our floor, we identified the house to be 1504. My wife insisted me to go immediately and I went through the fire exit to the 15th floor running. There were more than 5 people already gathered before 1504. (Sorry I only recognized Mr.Nagaraj among them). They confirmed the door is locked from inside, we tried to break the door.

We tried different things, but nothing happened. Keppels construction of the main door was solid and robust. We rang the bell of the neighbour of 1504, he opened it within seconds, possibly all the sound made him woke up and he was already on the way to open the door. Without even informing what it is we rushed to 1503's balcony.

4. To be honest I was surprised to see the Lady still hanging and still crying to get the attention. I went out of 1503 balcony and got hold of 1504 balcony rail and slowly got into the 1504 balcony. Note: Me or Suresh didnt jump from 03 to 04.

5. I got hold our leg and realized she was surviving because her ankle got jammed in the curved iron bar of our balcony railing. I requested for one more person to come to the balcony in the same way, since it will be impossible for me to lift the lady. Suresh really took the brave decision and volunteered to do this and by god's grace both of us reached 04 without any slippage or injury.

Within moment, Suresh was able to hold her hands and we managed to lift her and release her ankle from the rail and placed her in the balcony. I dont really recollect what exactly happened when were lifting her, but when we are about to place her in the floor, I heard lots of claps from my fellow Elita family who were witnessing this. For me & Suresh your claps were our life time achievement. Thanks.

6. Main twist to the story: Nagaraj and team requested us to open the door, so we can rush her to the hospital. Then we realised the balcony doors were locked, I assumed may be this lady accidentally locked the balcony door from outside and hence did something and fell off. So we broke the glass with barefoot and opened the sliding door lock and went to the main door. Door was locked with a key and we were unable to find the key.

We went to the lady and asked her where is the key. She told things in broken Kannada due to the shock. She is not from this apartment, and she fell off from 1704 hence she will not know where the key of this apartment -1504. It took us lot of time to understand her narration of the lady falling from 17th floor and getting stuck in this floor.

We informed the same to the rescue team which was closely guiding us. Nagaraj and team quickly started exploring options of calling the mobile number of this apartment owner/tenant, checking with CBRE for the records of this maid, arranging lock smith, informing police, etc.,

7. Keppel has done a good job by providing us a with a great lock and door. Even a professional lock smith was unable to open this door. It took lot of time to break open the door in the presence of the police. Once the door got opened, we had a big team rushed to help her to the hospital. My contribution ended there.

Also read the related stories extracted from THE HINDU

Early on Wednesday, the city woke up to the tragic news of a U.S.-returned 31-year-old software engineer falling to her death from the 11th floor of an apartment at Sahakarnagar. A day before that, a woman had a miraculous escape from a similar situation.

Nagarathna (36), a domestic help at the posh Elita Promenade apartment complex in J.P. Nagar 7th Phase, survived a fall from the 17 floor of the balcony she was cleaning early on Tuesday morning. She managed to escape with a broken leg as the railing on the 15 floor broke her fall. She is now recuperating in a private hospital on Bannerghatta Road.

A resident of the apartment, who did not wish to be quoted, said that the woman was cleaning the window pane from the sit out of an apartment on the 17 floor at around 5.30 a.m. The flat’s owner was in the U.S. and has given Nagarathna, a key to the apartment. She had bolted the door from inside and had started cleaning the window pane, reaching it with the help of a metal ladder, when she slipped. “She slipped and fell off, but somehow her leg got stuck to the railing of the sit out of the flat on the 15 floor. It was too early in the morning and to make matters worse, the 15 floor flat was also locked. A few boys living in the neighbouring flat heard her cries and crossed over to the balcony and managed to rescue her. In the meanwhile, the others got the security manager to open the 15 floor apartment and she was taken to hospital,” the apartment resident said.

Nagarathna is said to have suffered a fracture in the leg, but is refusing to speak to the media. She is yet to give a statement to the police. But, those who were witness to the incident, even though much later, called it “the rarest of rare cases,” even going as far as to say Nagarathna is “the luckiest woman to be alive.” 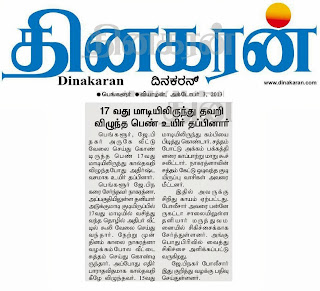